This was a first for a project of this kind within the South Dakota Field Office. The weeds program coordinator had been thinking about this type of treatment option on noxious weeds for a few years, and just within the last year decided to give it a try. Planning started back in October 2017 with calls and meetings to a local Sheep Field Specialist who works for SDSU Extension Center out of Rapid City, South Dakota and to the South Dakota Game Fish & Parks (SDGF&P) regional wildlife manager. Due to the proximity of an active Big Horn sheep herd, the SDGF&P needed to be consulted. 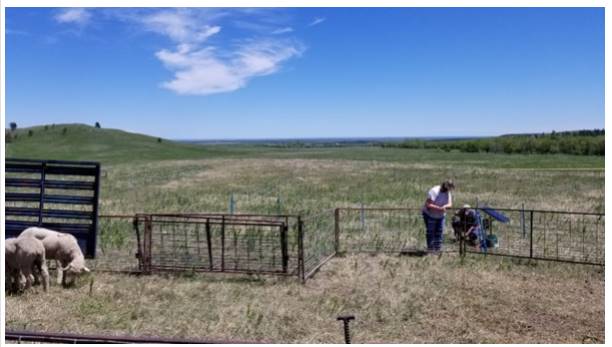 Herdsman setting up paddocks and holding pen.  Once the SDGF&P heard our proposal, they were supportive of the objectives we were trying to accomplish. We also consulted with a local operator who agreed to be the “herdsman” for the project. It was at this point that planning could start to move forward. The SDSU sheep field specialist was able to secure a grant for $3,000 to help with supply costs of the project, and the BLM would be assisting in covering costs of the labor.  Dalmation Toadflax was the identified noxious weed to be targeted by sheep, as it is listed as a locally noxious weed within Meade County, South Dakota. Prior to turnout of the 25 head of sheep, the BLM weeds program conducted some monitoring to

determine weed density within a given 96-meter plot area. It was averaged to be about 13 plants per square meter within the given plot.

Since this was the first time the South Dakota Field Office had initiated a targeted grazing project for noxious weeds, it was decided to keep the project area small. There were two locations initially planned for grazing. One area was a smaller three acre patch, while the other area was a larger 70 acre area.  The project area is located within the Fort Meade Recreation Area, which is directly adjacent to the city of Sturgis, South Dakota. The Fort Meade Recreation Area is highly utilized for cattle grazing, hiking, biking, horseback riding, camping and multiple special recreation events. 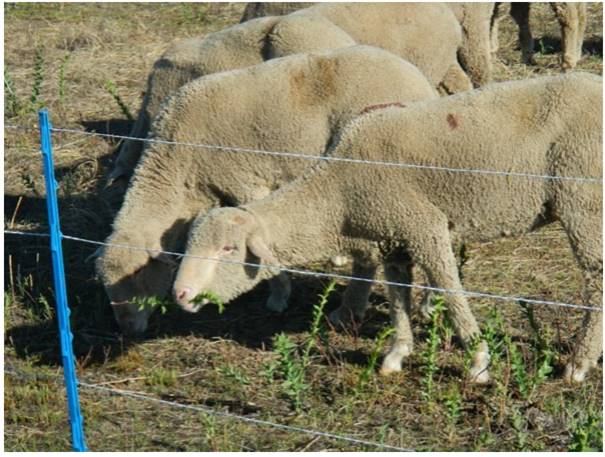 The main reason for utilizing the targeted grazing was to show the public that the BLM is trying to utilize multiple treatment options in our fight against the control of noxious weeds. Treatment options already utilized within the area are chemical and biological control methods. The period of performance was to run for 60 days starting May 1. This timeframe was cut a little short due to some weather and logistical issues with the second proposed plot. All of the focus was concentrated on the smaller three acre plot. The smaller three acre plot was broken into seven smaller paddocks in which the sheep grazed intensely from one to five days. There was also a small holding pen attached to a stock trailer where the sheep were put in every night to protect them from predators. 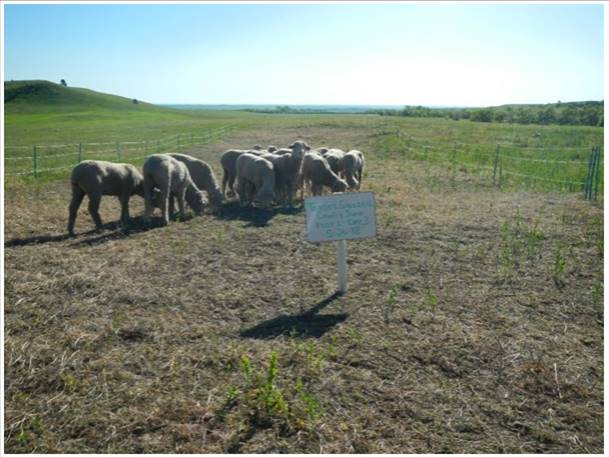 The herdsman was responsible for daily safety and care of the sheep, along with moving all the electric fencing that was used for the paddocks.  He also provided daily logs of animal behavior and eating habits. The BLM was able to use this project as a “site tour” during the annual Range Camp, which is attended by many other local Ag and Ranch Industries, students, county and state agencies, and local ranchers. It was very well received, with many good observations and questions from the participants and the general public. 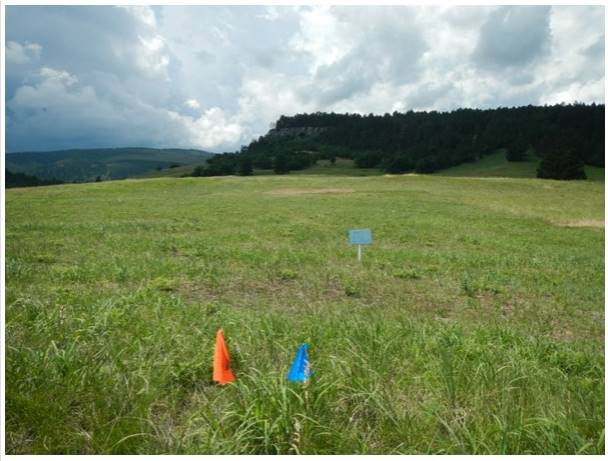 Approximately 30 days after on Plot 1 (No Chemical Treatment).

Upon conclusion of our project, we noted that approximately 90% of the live Dalmation Toadflax had been clipped from the top or the entire plant eaten to the ground. It took approximately four to five days until the sheep were targeting the Dalmation Toadflax over the other herbaceous plant material. We also noted that, in some weeks time, some of those same clipped plants started to re-sprout new stems. While we had taken out current seed production, we knew these plants would still be viable to produce seed at some point.   Since that time some of these plots have been treated with different herbicide treatments and some left “as is” to monitor the effects. Overall, this small project was a success for everyone involved. There has been some discussion in bringing the sheep back to graze the non-chemically treated area for a few short days.

Want to attend an event?

If you have questions, please contact Judge through email at jljessop@kennebectelephone.com or by phone at (605) 280-0127.

This website uses cookies to improve your experience while you navigate through the website. Out of these, the cookies that are categorized as necessary are stored on your browser as they are essential for the working of basic functionalities of the website. We also use third-party cookies that help us analyze and understand how you use this website. These cookies will be stored in your browser only with your consent. You also have the option to opt-out of these cookies. But opting out of some of these cookies may affect your browsing experience.
Necessary Always Enabled
Necessary cookies are absolutely essential for the website to function properly. This category only includes cookies that ensures basic functionalities and security features of the website. These cookies do not store any personal information.
Non-necessary
Any cookies that may not be particularly necessary for the website to function and is used specifically to collect user personal data via analytics, ads, other embedded contents are termed as non-necessary cookies. It is mandatory to procure user consent prior to running these cookies on your website.
SAVE & ACCEPT